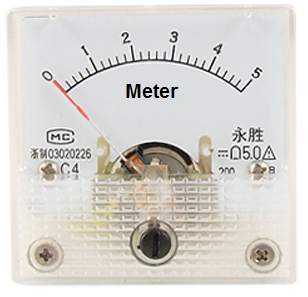 In this project, we will go over how to connect an analog volt panel meter to an arduino so that it can measure and give us a readout of light striking the circuit.

In this way, the circuit will function as a light meter.

The type of analog panel meter we will use is really generic. Light is usually measured in unit lumens, lux, or candela. However, it will be very difficult to find an panel meter that is calibrated in terms of lumens, lux, or candela. So a generic panel meter can be used that is calibrated in volts. If the circuit is set up properly, the idea is that you can still see how much the needle swings in proportion to changes in light, even if an exact value can't be read. If the needle barely moves at all, it is exposed to either darkness or very small amount of light. If the needle swings about midway, it's exposed to a decent level of light. If the needle swings all the way left, bright light is being shone on it.

This way, we can demonstrate how to build a light meter.


The analog panel volt meter we will use can be found at Sparkfun here: Analog Panel Meter- 0-5VDC. This can measure from 0V to 5V of DC voltage with 2.5% accuracy. It's fairly accurate. This volt meter can play the role as our light meter for this circuit.

The arduino light meter circuit we will build is shown below. 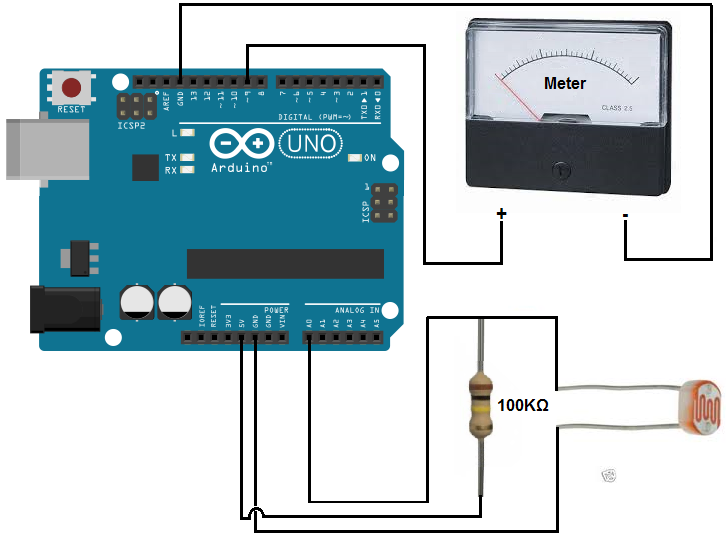 The circuit connections are pretty straightforward and basic.

Now that we have our circuit schematic setup, the only thing we now need is our code so that the arduino will know to process the voltage that falls across the photoresistor, which is connected to analog pin A0, and then correspondingly allow for deflections of the panel meter.

The full code is shown below.

We later create a variable sensorValue which will hold the value of the voltage that falls across the potentiometer and another variable invertedValue which serves as the value we send to the panel meter so that it knows how far to deflect the needle. We then take another variable outputValue which takes the invertedValue, which can range from 0 to 1023, and converts it into an analog value that ranges from 0 to 255. Once we have this converted value, we then can write this value to the analog panel meter, which is connected to D9. This allows the meter to shift correspondingly with the voltage drops across analog pin A0.


To see how this circuit works when actually connected together, see the video below.

How to Drive a 7 Segment LED Display with an Arduno

How to Build a Dark-activated Light Circuit

How to Build a Hall Effect Sensor Circuit

How to Build a Touch Sensor Circuit

How to Build an Accelerometer Circuit

How to Build a Motion Detector Circuit

How to Build a Motion Detector Alarm Circuit